At first the goal was to create an environment to keep injured players busy and in shape, but in recent years the Mongrel has evolved to a key component in the reconditioning of injured players.

Johan van Wyk, Performance Manager at the Stellenbosch Academy of Sport, along with conditioning coaches Hannes Prinsloo and Llewellyn Morkel have masterminded this innovative concept. “It started originally when junior rugby became professional and injuries started to occur on a regular basis. We wanted to keep the injured players busy. Give them the environment to stay focused,” said Van Wyk.

The trio started the Mongrel with the Western Province Rugby Institute and since the opening of SAS in January 2012 Van Wyk and his team of professionals has established the Mongrel as one of the core aspects to fast track an injured player back onto the playing field. “The Mongrel creates a hard working environment. There is no floating through this. It’s not a place for what we call ‘race horses’…totally the opposite. We have clear goals in each session and there is a close working relationship between the conditioning coaches and the physiotherapists.”

According to Van Wyk the easiest and most simplistic way to describe the Mongrel is a conditioning session for injured players. “But there is so much more to it when you start analysing it. We push the players to the edge, but we do it in a safe and responsible way. There is obviously the safety zone – when the player is wrapped in cotton wool – but we believe doing something is always better than doing nothing. We make sure to take out the danger in what we do.”

Some of the players who have done their rehab at SAS over the years include Jean de Villiers, Duane Vermeulen, Schalk Brits (Springbok-rugby players), Cecil Afrika, Werner Kok, Justin Geduld, Kyle Brown and Chris Dry (Springbok Sevens rugby players) and SuperSport United’s Chase Parsons (soccer player). “The Mongrel is more of a battle with yourself than the weights or the conditioning coach, because the outcome is all depending on what you put in,” said Dry.

For Van Wyk and his team the challenge is to make sure the player makes a safe comeback in an accelerated time frame. “We pride ourselves on what we do. It’s not only our jobs. It’s our passion. We do make the process personal and we put our reputations on the line with each player we help through the rehab process because we believe in the process, not because we have a chip on our shoulders. For us the goal is to make sure that each player that goes back on the field is not merely as good as he or she was before, but to help that player to be even better than before the injury.”

This hefty task demands a lot from the team. “The job is actually never done. We do ad-on rehab especially with compromised joints. Micro-management – like alignment issues – is important. It is the small things we do right that will prevent serious injuries.” 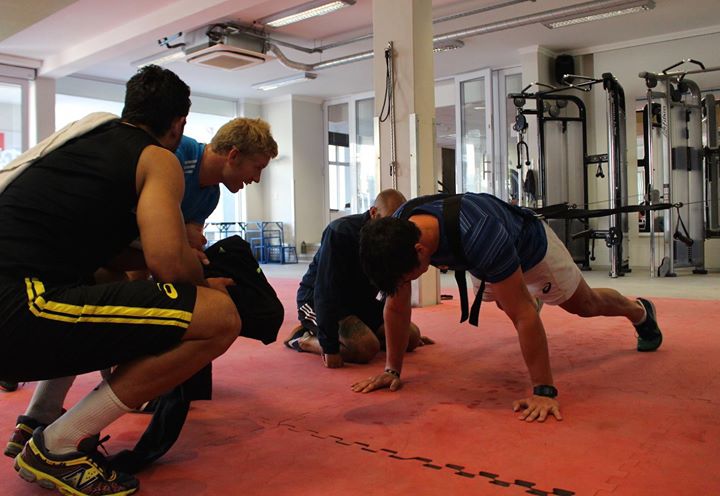